The clash of nations at Magny-Cours

While the Clio Cup Europe takes a break this week, Clio Cup France, Clio Cup Spain and Clio Cup Eastern Europe will gather at the Circuit Nevers Magny-Cours for an astonishing meeting with nearly 40 cars on track from Thursday to Sunday!

The fourth event of the season offers a unique configuration in Clio Cup, with three national series and 37 drivers representing 11 countries coming together at the former venue of the French Formula One Grand Prix. With no less than nine separate battles for victory in each race, the action promises to be lively in the Nièvre!

Among the competitors in Clio Cup France, David Pouget (GPA Racing) and Nicolas Milan (Milan Compétition) will resume their battle after picking up a victory apiece  last month at Nogaro. However, the they will have to keep an eye on Alexandre Albouy (GPA Racing), third overall and winner in the Challengers Cup last time around.

The tension should also rise in the Challengers Cup. In addition to the already mentioned protagonist, there will also be some hungry young hopefuls, such as Jordan Leneutre (JSB Competition) and Jerzy Spinkiewicz (Uniq Racing), who is getting closer to score his first Clio Cup overall win. Meanwhile, Léo Jousset (Milan Compétition), Guillaume Maio (GM Sport), Aurélien Renet (JSB Compétition), Julien Baziret (Vic'Team) and Antoine Bordagaray (Team Borda Rally) will target their first success of the season on a circuit they know quite well.

After his two wins in the Gentlemen Drivers Cup on home soil at Nogaro, Mathieu Rigoulet (Vic'Team) want to widen the gap to his rivals led by Horn (GPA Racing). Horn is not the only driver who wants to end the leader’s winning streak as Jérémy Bordagaray (Team Borda Rally), Lionel Viguier (T2CM) and the title holder, Laurent Dziadus (Team Lucas) all share the same objective. Meanwhile, Cédric Delcroix, Benjamin Cauvas, Pierre Monmaneix, Stéphane Nevrs and Yann-Maël Navillod are eager to represent GPA Racing. But Michel Faye (GM Sport) and Michel Leal (Milan Compétition) intend to deprive them of this pleasure.

Clio Cup Spain: everyone versus Royo!

Alex Royo (Team VRT) leads Clio Cup Spain after taking the first two races at Jarama last month. The 2017 title winner aims to continue his winning ways, but his rivals are preparing to fight back and battle for the lead in the Challengers Cup.

Alex Lahoz (Cotauto Motorsport) and Jordi Palomeras (Team VRT) are all square in the general classification and separated by just one point in the Challengers Cup will be in the fight, just like Nico Abella (Chefo Sport). After a first experience at Jarama, Turkey's Emre Can Ünal (Team VRT) and Spain's Lydia Sempere (Team VRT) have higher ambitions. The latter will once again benefit from the support of the Renault Group Fundación España, a stakeholder in inclusion and solidarity, to break the taboos associated with hearing impairment.

The duel will also resume in the Gentlemen Drivers Cup. Fabien Julia (LR Performance), winner of the two races in Spain, will try to repeat the feat in front of his home crowd, but Spain's Joaquin Rodrigo (Vearsa Sport) hopes to repay his rival on his home turf!

Newly created this year, Clio Cup Eastern Europe will kick off its season with an incredibly open field.

Already a front-runner in the Clio Cup Europe, Marc Guillot (Milan Competition) can count on his prior Magny-Cours experience to excel in front of his home crowd to become the first leader of the series, but the Burgundy native has his work cut out for him against the likes of three-time  Clio Cup Central Europe title-winner Tomáš Pekař (Carpek Service) from the Czech Republic while Switzerland's Andreas Stucki (Stucki Motorsport) also wants to put his experience to good use in his bid for a first Clio Cup crown.

Against this trio, Germany's Henrik Seibel (Carpek Service), Finland's Juuso Panttila (Carpek Service) and Taiwan's Lin Chen Han (Uniq Racing) can rely on their enthusiasm to fight for the title. Unless The Netherland's Stephan Polderman (Chefo Sport) and Rene Steenmetz (Chefo Sport), who are both entered in the Gentlemen Drivers Cup, could create a surprise and shake up the hierarchy!

Clio Cup - The clash of nations at Magny-Cours 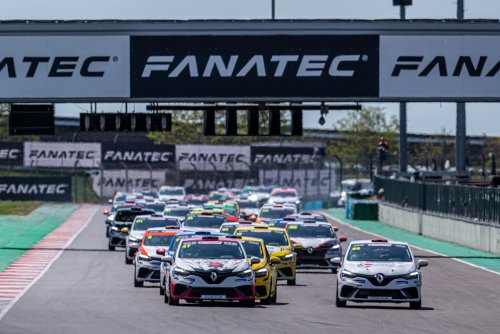