While Nicolas Milan was quickest in the Thursday practice session run in the rain, David Pouget did the same in dry conditions on Friday. The Frenchman kept the momentum going in qualifying to take the pole position with a lap of 1:58.089s ahead of Nicolas Milan and Marc Guillot while Alexandre Albouy completed the second row on the grid.

On Saturday, Nicolas Milan charged off the start line to take the lead at turn one, but David Pouget instantly retook the lead after his rival slid off-line. Guillaume Maio (GM Sport) and Alex Royo (Team VRT) made an excursion into the gravel while Emre Can Ünal (Team VRT) and Yann-Mael Navillod were also trapped in an animated opening lap bringing out the safety car.

David Pouget controlled the restart in front of Alexandre Albouy, who lost his position to Nicolas Milan at the Adelaide hairpin. Marc Guillot took a page out of his teammate's book at the Lycée braking zone the following lap, while Nicolas Milan put the leader under pressure before making an unforced error on lap seven.

Overall winner David Pouget also claimed his second victory in the three Clio Cup France races held to date. The Frenchman beat his closest rivals, Nicolas Milan and Alexandre Albouy, to extend his lead in the general classification to 14 points.

Thanks to his class win, Alexandre Albouy takes over the lead in the Challengers Cup, where Joran Leneutre moves up to second place after getting the better of Jerzy Spinkiewicz at the start. Dominating the Gentlemen Drivers Cup, Jérémy Bordagaray also did his title hopes a lot of good by winning ahead of Laurent Dziadus and Pierre Monmaneix even though Mathieu Rigoulet (Vic'Team), fourth today, increases his lead to 19 points.

In Clio Cup Spain, Nico Abella scored his first win of 2022 by overtaking Alex Lahoz on lap five. The Spaniard took the win ahead of Jordi Palomeras, who also surprised Alex Lahoz with two laps remaining. The three drivers also finished in the same order on the podium of the Challengers Cup while Fabien Julia (LR Performance) dominated the Gentlemen Drivers Cup against Joaquin Rodrigo (Vearsa Sport).

Sixth after his spin at the start, Alex Royo keeps the lead in the general classification with a 13-point lead from Jordi Palomeras and 19 points ahead of Alex Lahoz. Nico Abella moved up to fourth place with his victory. In the Challengers Cup, Jordi Palomeras takes the lead by two points over Alex Lahoz, while Fabien Julia widens the gap over Joaquin Rodrigo with his third consecutive Gentlemen Drivers Cup success.

In the first-ever meeting of Clio Cup Eastern Europe, Marc Guillot won ahead of Tomas Pekar and Andreas Stucki (Stucki Motorsport). The Frenchman thus takes command of the new series, as does Finn Juuso Panttila (Carpek Service) in the Challengers Cup after his victory over Chen Han Lin (Uniq Racing) and Henrik Seibel (Carpek Service). In the Gentlemen Drivers Cup, Dutchman Stephan Polderman (Chefo Sport) also became the first leader of the season, thanks to his win from teammate René Steenmetz (Chefo Sport).

The Clio Cup France, Clio Cup Spain and Clio Cup Eastern Europe competitors will be back in action on Sunday for qualifying from 11.20 am to 11.40 am before race two of the weekend at 5.20 pm. The race will be streamed live on the Renault Clio Series Facebook page and YouTube channel.

ABOUT THE CLIO CUP 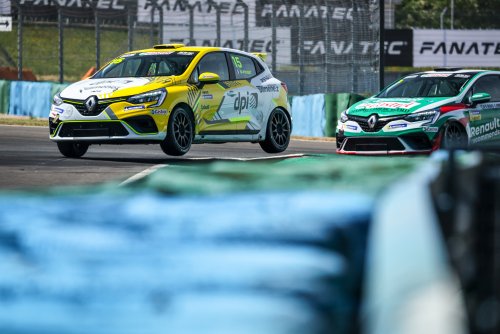