Milan inherits the win at Zandvoort

Anthony Jurado (Milan Compétition) thought he was back in the title fight with pole position and a win on Saturday after a hard-fought battle at Zandvoort, but the Frenchman dropped to third place after a post-race penalty. Nicolas Milan (Milan Compétition) inherited the top step of the podium ahead of David Pouget (GPA Racing) and his teammate to extend his lead in Clio Cup Europe. At the end of a lively race throughout the field, Léo Jousset (Milan Compétition) and Quinto Stefana (Milan Compétition) picked up the wins in the Challengers Cup and Gentlemen Drivers Cup.

In cloudy and windy conditions, Anthony Jurado controlled the start on Saturday afternoon despite Marc Guillot's attacks. Nicolas Milan and David Pouget took advantage to get in between the two before being imitated by Tomas Pekar at the end of the opening lap in which Mathieu Lannepoudenx (Milan Compétition) retired.

The battles intensified up and down the order. On lap four, Nicolas Milan attacked Anthony Jurado, but his offensive provoked a regrouping of the leaders and a door-banging duel between Anthony Jurado and David Pouget. Despite the constant pressure of his pursuers, Anthony Jurado held onto the lead while the action heated up among the Challengers chasing them. Joran Leneutre (JSB Compétition) and Léo Jousset got the better of Nikola Miljkovic (Tempo Racing Team), then Tomas Pekar.

The safety car was called into service on lap eight after Andreas Stucki (Stucki Motorsport) retired. The race resumed for a breathtaking final six-minute sprint, where Anthony Jurado, Nicolas Milan and David Pouget quickly pulled away from the rest of the field.

Despite a last-ditch attempt by David Pouget, Anthony Jurado held on to take the win while Nicolas Milan made the most of the situation to pass David Pouget for second place. This manoeuvre wound up being the race-winning move for Nicolas Milan after Anthony Jurado was given a two-place penalty for having pushed David Pouget off the track. Marc Guillot came home in fourth place ahead of Challenger Léo Jousset, who passed Joran Leneutre on the last lap as Tomas Pekar looked on. Jerzy Spinkiewicz (Uniq Racing), Alexandre Albouy (GPA Racing) and Julien Briché (JSB Compétition) completed the top ten, which was separated by less than five seconds at the chequered flag.

Nicolas Milan also inherited the victory in Clio Cup Europe ahead of David Pouget and Anthony Jurado to increase his lead in the general classification. With the win, Nicolas Milan slightly increased his lead in the general classification. At the end of what was a lively race, Jerzy Spinkiewicz won at the expense of Nikola Miljkovic to extend his advantage in the Challengers Cup. Guillaume Maio (GM Sport) completed the category podium. Quinto Stefana led from start to finish and now leads the Gentlemen Drivers Cup thanks to his victory over René Steenmetz (Chefo Sport) and Stephan Polderman (Chefo Sport).

Nicolas Milan won his duel with the leader of the Clio Cup France in the closing minutes, and this second win of the year sees him reduce his deficit to 20 points from David Pouget in the general classification. Third, Léo Jousset saw his labours rewarded by a first overall podium and a first success in the Challengers Cup ahead of Joran Leneutre, who now leads the category, and Jerzy Spinkiewicz. Mathieu Rigoulet (Vic'Team) took a dominating win, ahead of Pierre Monmaneix (GPA Racing) and Lionel Viguier (T2CM) to score his third win in five races this season and take the lead in the Gentlemen Drivers Cup.

Although he missed out on the podium in Clio Cup Europe, Marc Guillot picked up his third consecutive victory in Clio Cup Eastern Europe. The Frenchman took the lead on lap three, ahead of his closest challenger, Tomas Pekar, and Juuso Panttila (Carpek Service). Thanks to his third-place result, the Finn won the Challengers Cup in front of Henrik Seibel (Carpek Service) and Chen Han Lin (Uniq Racing) and now leads  the general classification despite his four-place grid penalty due to an incident at Magny-Cours. Meanwhile, Rene Steenmetz won his home race against his compatriot and teammate Stephan Polderman to take the lead in the Gentlemen Drivers Cup.

The Clio Cup competitors will meet again on Sunday for qualifying at 9 am before the final race of the first half of the season at 12.45 pm, which will be streamed live on the Renault Clio Series Facebook page and YouTube channel.

Milan inherits the win at Zandvoort 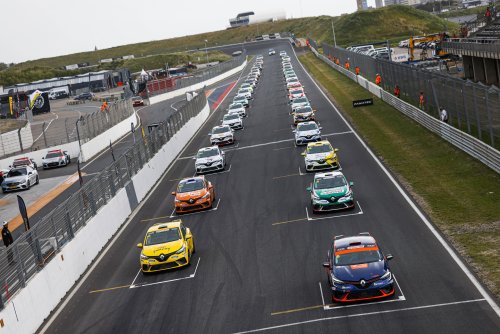