From sixth place on the grid, Felice Jelmini (PMA Motorsport) put in a superb comeback drive to win a thrilling battle for victory at the Autodromo Enzo e Dino Ferrari d'Imola. With the victory ahead of Nicolas Milan (Milan Compétition) and Marc Guillot (Milan Compétition), the Italian is the fourth different winner in the first six races this season and takes the Clio Cup Italia lead, as does Nicolas Milan in Clio Cup Europe.

On a partially wet track, the race began behind the safety car. The proceedings really began on lap three when Marc Guillot took off ahead of Nicolas Milan. Having opted for rain tyres, David Pouget found himself under pressure from his pursuers. Anthony Jurado was the first to overtake him at the Variante Alta on the same tyres before being followed by Felice Jelmini and Jerzy Spinkiewicz. There was also plenty of action further back in the field where Cristian Ricciarini (Essecorse), and Lorenzo Nicoli (Progetto E20 Motorsport) made the most of thier choice to start on slicks to overtake Mathieu Lannepoudenx (Milan Compétition).

The safety car returned on track after contact between Damiano Puccetti (PMA Motorsport) and Due (Oregon Team). At the restart, Nicolas Milan took the lead from Marc Guillot. Felice Jelmini also overtook the Frenchman at Tosa before attacking the leader. After an unsuccessful attempt, the Italian found the opening before pitching his Clio Cup into a spectacular opposite-lock drift into Acque Minerali, which allowed Nicolas Milan to regain the lead of an ever more compact leading quartet as Marc Guillot battled with Jerzy Spinkiewicz at the exit of Rivazza.

Felice Jelmini took off again and passed Nicolas Milan on the penultimate lap and held off his rival to seal his first victory of the year in front of his home crowd. Third on the last lap, Jerzy Spinkiewicz was penalised one-second for his role in an incident with Marc Guillot, who moved up third while Cristian Ricciarini inherited the win in the Challengers Cup. Gabriele Torelli (Faro Racing) finished sixth ahead of Lorenzo Nicoli, Cosimo Papi (Scuderia Costa Ovest) and Nico Abella (Chefo Sport). Gentleman Driver Alex Lancellotti (Scuderia Costa Ovest) completed the top ten.

As Felice Jelmini is not competing in Clio Cup Europe, Nicolas Milan won again in Italy ahead of Marc Guillot and Cristian Ricciarini. The Frenchman did his titles hopes a world of good, taking the lead of the race for his own succession, while his rivals lost big in betting on rain tyres and taking penalties.

In the Challengers Cup, Jerzy Spinkiewicz sees his winning streak come to an end with the win for Christian Ricciarini. The Polish driver still extended his lead in the category where Lorenzo Nicoli completed the podium on Sunday. Meanwhile, Stephan Polderman (Chefo Sport) takes the lead in the Gentlemen Drivers Cup thanks to his victory over Luciano Gioia (Essecorse) and Rene Steenmetz (Chefo Sport).

Saturday's victor Felice Jelmini made it two for two in Clio Cup Italia by winning in front of Cristian Ricciarini and Gabriele Torelli to widen the gap from his two closest rivals in the general classification. Second overall, Cristian Ricciarini won the Challengers Cup ahead of Lorenzo Nicoli and Cosimo Papi to take the lead in the class. Lastly, Alex Lancellotti finished tenth overall, fifth in Clio Cup Italia, but more importantly, won in Gentlemen Drivers Cup ahead of Luciano Gioia and Andrea Argenti (SI Racing Team) in a category that promises to be intensely competitive as the top five are covered by just ten points.

While the next Clio Cup Italia meeting will take place on 3-5 June at Misano, and Clio Cup Europe's next stop will be at Zandvoort on 17-19 June, more than forty competitors will be back in action in just a few days in France. Starting on Thursday, the Circuit de Nevers Magny-Cours will host the second rounds of Clio Cup France and Clio Cup Spain and the first meeting of Clio Cup Eastern Europe! 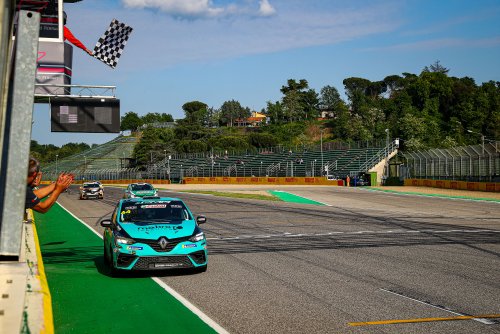